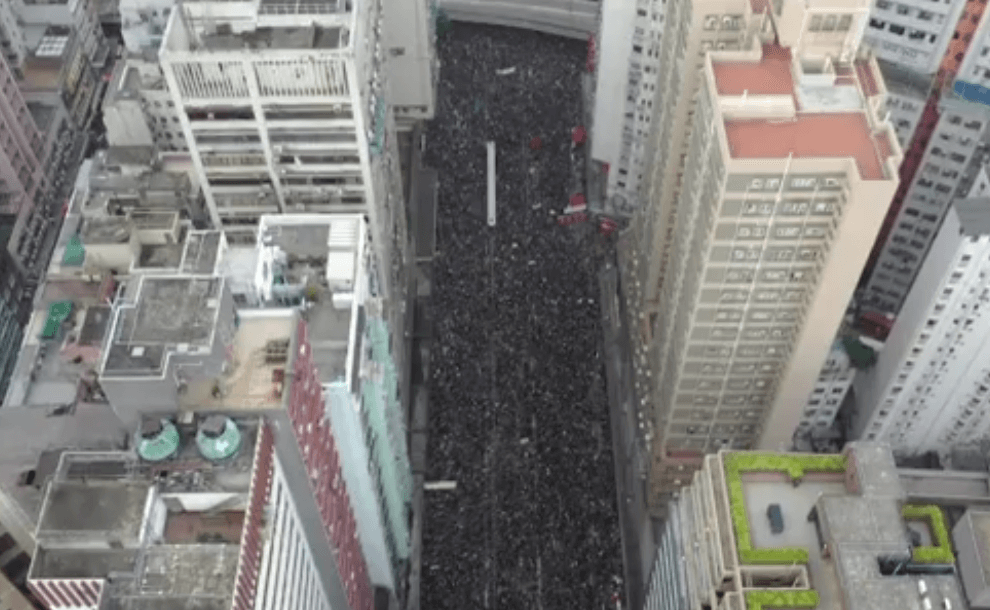 The Hong Kong government is considering a controversial law where people accused of crimes in China would be extradited to the mainland. This proposed law erupted the largest public protest in the history of humanity—nearly 2 million took the streets.

The protesters are concerned about their political freedom and freedom of speech. Christians are concerned about their religious freedom. At one point during the protests, the police fired tear gas and rubber bullets at the crowds. In order to diffuse tensions and help calm the situation, Christians starting singing the song. Because of it’s simple tune and only one line of lyrics, many others, including non-Christians, starting singing along. You can real the full story at the BBC.

In Hong Kong religious gatherings are legally protected in public places and so singing a Christian hymn acts as a political shield against police disruption. In this video on twitter, you can see protesters surrounding the police station, singing the song.

In solidarity with my brothers and sisters in Hong Kong, I wanted to praise God with them, so I sang the song a few times at my desk. We sang this song in my high school youth group with some extra lines of the same tune:

“Bow down in worship to the Lord.”
“Jesus is King and Lord of all.”

It should be difficult NOT to see the hand of God in this. Mainland China is notorious in the West for abusing human rights. They have amped up persecution against Christians, they are experts in government censorship with their mighty great firewall over all internet access, and their social credit system, which is a form of mass surveillance, has been making the news lately that punishes people for their social and economic flaws, such as playing too many video games, spending frivolously, jaywalking, sleeping on the sidewalk, and so on.

The unique circumstances of this protest has yielded a situation where God is praised for 18 hours straight, within the context of a peaceful fight for freedom, all while the world watches. All the nations are on borrowed time to yield to God through His Son, Jesus. This is one of God’s friendly, peaceful reminders.

Psalm 2:
Why do the nations rage
and the peoples plot in vain?
The kings of the earth set themselves,
and the rulers take counsel together,
against the Lord and against his Anointed, saying,
“Let us burst their bonds apart
and cast away their cords from us.”

He who sits in the heavens laughs;
the Lord holds them in derision.
Then he will speak to them in his wrath,
and terrify them in his fury, saying,
“As for me, I have set my King
on Zion, my holy hill.”

I will tell of the decree:
The Lord said to me, “You are my Son;
today I have begotten you.
Ask of me, and I will make the nations your heritage,
and the ends of the earth your possession.
You shall break[b] them with a rod of iron
and dash them in pieces like a potter’s vessel.”

Now therefore, O kings, be wise;
be warned, O rulers of the earth.
Serve the Lord with fear,
and rejoice with trembling.
Kiss the Son,
lest he be angry, and you perish in the way,
for his wrath is quickly kindled.
Blessed are all who take refuge in him.