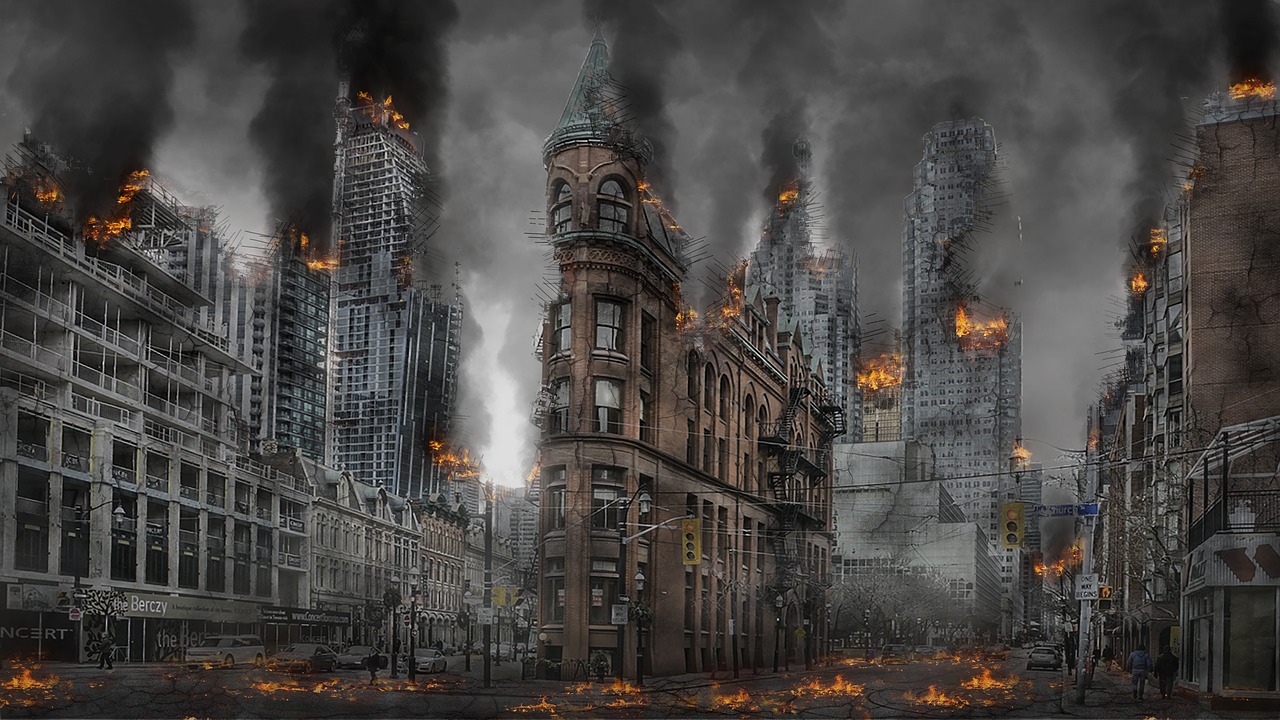 When I first became a Christian, I learned that Jesus would come back to earth and bring with him a new kingdom. Conveniently, as it was told to me, this event would happen in my lifetime. Generalized moral decay in the United States coupled with “rumors of war” and natural disasters supposedly pointed to Jesus returning within the next hundred years. Many Christians I knew believed the rapture would happen in our lifetime. More Christians I knew believed, and still believe, that the re-institution of Israel as a state was a huge stepping stone toward Jesus’ return, which would be followed by the rebuilding of the temple. According to them, after the temple is built Jesus can come back at any moment.

In light of my early Christian upbringing, I was under the impression that the book of The Revelation explicitly stated that the rapture would happen, then there would be tribulation, and an Antichrist who rules the world. In high school I read Revelation for the first time on my own. I was shocked to not find the word rapture. I also did not find the prophecies around Israel and the Antichrist particularly clear. I started to question most of what I knew about Jesus’ return. Without getting too far into eschatology I realized I was unsure. I was unsure of the rapture, I was unsure of the link between end times and the nation of Israel, and I was unsure that Christ would come back in my lifetime. While I still held fast to Christ’s return and a new kingdom, I let go of my ideas about when that would happen. I let go of my timeline because of the following verses.

“But concerning that day or that hour, no one knows, not even the angels in heaven, nor the Son, but only the Father. Be on guard, keep awake. For you do not know when the time will come. It is like a man going on a journey, when he leaves home and puts his servants in charge, each with his work, and commands the doorkeeper to stay awake. Therefore stay awake — for you do not know when the master of the house will come, in the evening, or at midnight, or when the rooster crows, or in the morning — lest he come suddenly and find you asleep. And what I say to you I say to all: Stay awake.”
– Mark 13:32–37 (ESV)

“But concerning that day and hour no one knows, not even the angels of heaven, nor the Son, but the Father only.
– Matthew 24:36 (ESV)

A History of Apocalyptic Predictions

I am still not entirely clear on the rapture or the true interpretation of Revelation, but I am sure that Jesus isn’t interested in us predicting the day of His return. It is clearly important to read Biblical Apocalyptic texts deeply and well, but it is unwise to use Revelation and Daniel to predict the date of Jesus return. Christ himself did not have authority over that date. I believe the practice of date setting, either explicitly (e.g. Jesus will come back May 2, 2020) or vaguely (e.g. Jesus will return in my lifetime), is directly against the words of Jesus and would fall under vain speculation as discussed in 1 Timothy 1:6-7. Christians have Biblical statements to tell us dating Jesus’ return is futile, and the Church has a long history of making wrong predictions about Jesus’ return.

The list above catalogs a history of setting the date or predicting a time period of Jesus' return. Each prediction has its different motivations and different levels of credibility. Some predictions were made by those who appear to be righteous followers of Christ. Other predictions were made by fringe cult leaders who incited radicalism and violence. All of the above predictions have three things in common. First, they were founded based on a misinterpretation of the Bible. Second, they all predicted that the apocalypse would come within their expected lifetime. Third, they all were proven false. It is suspicious that all predictions are made about the near future because if there really is a biblical code that would allow someone to determine the date of Jesus' return then it should be unbiased about who is deciphering it. Unfortunately, each prediction is egocentric and assumes the end of things is in the predictor's immediate future. The pattern is: do strange math loosely based out of Daniel and Revelation and conclude that the apocalypse will come within the next fifty years. Then someone two hundred years after them does similar weird math and concludes that the end will come within the next fifty years. The cycle has repeated itself for centuries.

By this point in history, the Church should know better than to attempt apocalyptic date predictions. While the Church at large doesn’t typically attempt to set a specific date for the apocalypse it still tries to set a time frame for Jesus' return. Pew Research in 2013 found that 47% of Christians believe christ will return by the year 2053. 4

The stats are further broken down below.

Christians shouldn’t have definite predictions about something the Bible specifically says we do not know. I appreciate that people can have speculative predictions hedged with "probably will" or "probably won’t", but that still appears to be the wrong way to think about the coming kingdom. “I don’t know” should have been the majority answer, because we certainly do not know when Jesus will return.

It is unwise and dangerous for Christians to speculate about things that are not their place. We, as Christians, have no authority to determine the end date of our era and we should be patient with that reality. Instead of speculation, we should join with the martyrs in Revelation in their prayer for the Day of The Lord to come quickly. The saints in heaven appear in Revelation to be awaiting the Day of The Lord. They do not know when it will come, they pray that it will come soon but they are told to rest a little longer (Revelation 6:10-11). Jesus himself stated he did not know when he would return (Mark 13:32).

Why Do Christians Still Try To Predict The End?

From my observation, I see a few key reasons people fall into this trap. First, I think people just want to know when the end comes. Second, I think people get confused by media and apocalyptic doctrine. Finally, I think people confuse preparation with prediction.

The end of all things can be ominous without assurance in Christ. Also, there is a great amount of assurance and power in being able to plan around a specific end date. People are impatient about things they do not know and afraid that they won't be ready if they don't know when Jesus will return. It seems reasonable, from a worldly perspective, to try and figure out the day. Many people who predict the end develop a great amount of power and following. John of Leiden was able to make himself “king” in Münster Germany because he claimed to know the New Jerusalem would be coming to that spot very soon. Other apocalyptic predictors, such as Jim Jones and David Koresh, followed in his footsteps and built out whole communes in which they had absolute authority over their people. Power is alluring, and secret knowledge can be intoxicating.

One culprit responsible for fear and apocalypticism is the Left Behind series. I read four of the Left Behind books when I was a kid. I read a parallel to the original series but written for teenagers. I wanted to read the books because I saw the Left Behind movie, and was terrified that my friends and family would disappear into a pile of clothing leaving me all alone. So I got the books to help me better understand what this “rapture” concept was about. Unfortunately, the books didn't help with the fear but made me more interested in trying to discern the future events of the Great Tribulation. Thankfully, I grew out of that phase but I see how it sucks people in. That level of literal interpretation and speculation is alluring. Thinking about bombs exploding before they enter Israeli airspace because the Lord is protecting them is an entertaining imagining of the end times, but it doesn't spur people toward sharing the Gospel. It typically spurs them to speculate even further about who the Antichrist is and what is the Mark of The Beast. Also, the series directly perpetuates an assumption that the end times are going to happen in our lifetime.

When considering the end it is important to distinguish between preparation and prediction. As mentioned, Jesus exhorts his followers to stay awake and be ready for the Master's return. I have heard this verse used to justify reading the signs of the times as predictors of the apocalypse. I don't see that application in the text. They are to stay awake because they do not know when he will return. This is paralleled by the parable of the ten virgins in Matthew 25, they are to “Watch therefore, for you know neither the day nor the hour” (v.13). A point of both teachings is to be prepared, but the preparation is directly linked to the fact that we do not know when the day will come. Declaring that we do not know when the day will come is not an exhortation to predict the day, but to prepare for the day in obedience. The grounding concept of being prepared is the fact that we don't know. To interpret these verses as an exhortation to predict the end times is a misunderstanding.

The Church holds to vestiges of apocalyptic prediction which often stems from a desire to better understand the Bible, but branches into vain speculation. Through the testimony of scripture, we see prediction is a bad way to approach The Day of The Lord. Through the testimony of history, we can see prediction is a fruitless way to approach The Day of The Lord. Despite the alluring pull to know when the end will come, it is up to Christians to resist the temptation. Instead, the Church should pour itself into discerning eschatology without time predictions, and use this eschatology as a catalyst to spur us into evangelism. Knowing the Glory of Christ’s return is a wonderful thing which should garner the application of obeying him in preparation for his coming. After all, the book of Revelation is not the Revelation of the antichrist or the future of the United States but is the Revelation of Jesus Christ. Let's look to his teaching in the great commission and obey it. This way we will be prepared for his coming.