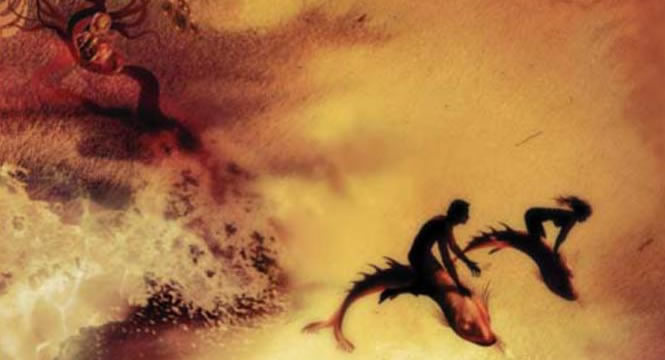 "Always one must throw oneself into the wave." Read Story

A Note About Fiction

Recently we posted an article on the importance of fiction in faithfully cultivating our spiritual lives. This will be our first book review of a fictional work, and I hope you see how this particular narrative delves deep into truths that many of us struggle to see in our daily lives. Then “having the eyes of your hearts enlightened… you may know what is the hope to which he has called you, what are the riches of his glorious inheritance in the saints.” (Eph 1:18) This was my experience, and I trust it will be yours. Allow me to entice you with this brief article.

This fairy tale set in space, tells the tale of Ransom, an earth-man sent to Venus on a mission. He doesn’t yet know what this mission is. He finds Venus (or ‘Perelandra’ as they call it locally) to be teeming with life: good, peaceful life, untainted by transgression. This perfection is primarily personified in a woman with green skin.

It is certainly worthwhile to stare at innocence for a while.

When did you last spend time pondering something because it was pure? Have you thought recently about honor? Have you intentionally meditated on commendable things?

Maybe you have. Maybe you regularly do. Such is Christ. He is worth thinking long and hard about.

If you haven’t practiced this in a while, or ever, C. S. Lewis is here to help you.

I invite you to step into Perelandra, Lewis’ depiction of celestial Eden, to ponder with him what pre-fallen man was like.

“Pre-fallen.” What a disgraceful way to describe God’s original pearl of creation, his designed image bearers. To have fallen man as the referent will not always be the case, but it naturally is to us.

Perelandra helps to set our hearts right, as we see utter beauty and joyful innocence as the anthropological standard. To compare us with the green woman, is the perspective more rightly ordered with God’s, than to compare the green woman with us.

At times, I found it humorous (and bothersome) how often Lewis used phrases such as “somewhat like, but not quite” in this story. Over and over again he used these “descriptive” words. Books are supposed to show your mind’s eye what to see, but often he couldn’t do it. It seemed he wouldn’t do it. This can be frustrating in a story, but he was communicating something by doing this repeatedly.

He was communicating otherness.

Our whole planet is somewhat like, but not quite what it once was. Everything is affected by sin, but bears resemblance to its perfect ancestors.

Dwelling on this for the time that it took to read a short book, stirred in me a longing for restoration, perfection, and the youth of our world.

It stirred a longing for a heart that finds its greatest delight in its maker.

Where else could delights come from?

The green woman says to Ransom,

Your world has no roof. You look right out into the high place and see the great dance with your own eyes. You live always in that terror and that delight, and what we must only believe you can behold. Is not this a wonderful invention of Maleldil’s [God’s]? When I was young, I could imagine no beauty but this of our own world. But He can think of all, and all different.” 2

How often do we rejoice and marvel in creation (sunsets, mountains, oceans, pelicans, daffodils), and stop short at mere gratitude, rather than continuing through that good gratitude into delight in the maker Himself?

I found that this book, unlike any other book I’ve read (save the Bible), caused me to dwell on the goodness of God’s creation, wonder at its mysteries, and look toward the Righteous One himself.

Pondering the perfection of Yahweh’s created world is quite an undertaking. Lewis spends time in detail, washing away our presuppositions of tainted normalcy. He cannot do this on our own planet, so he takes us to another where we can see with fresh eyes. Was not our planet thus alien to the one we have now, when God first breathed the leaves onto the trees?

Alien, and yet native.

Here we spend a lot of time examining the jewel of creation: mankind. Specifically, a woman.

Most of my life I have seen Eve as a villain, an idiot, a disappointment. Though she eventually disobeyed God almighty and, with her husband, plunged the world into darkness, those aforementioned descriptors seem vulgar when spoken of the properly envisioned Eve. Take this passage from the book,

He went a little farther in the wood, which grew thickly hereabout, and almost tripped over the sleeping form of the Lady… “I shall never see her again,” he thought; and then, “I shall never again look on a female body in quite the same way as I look on this.” As he stood looking down on her, what was most with him was an intense and orphaned longing that he might, if only for once, have seen the great Mother of his own race thus, in her innocence and splendour. “Other things, other blessings, other glories,” he murmured. “But never that." 3

Believe it or not, come this point in the book, you will feel the same. A longing to see our perfect mother. Surely, nothing we’ve seen with our eyes compares to her loveliness, nobility and purity.

If this be so, could the same not be said about her sinless offspring, if there was such a person? If there was a man who descended from Eve, born sinless, born to crush the head of the serpent?

In examining lovely perfection, what a horror to see the potential of even one sin entering such a scene.

Lewis’ tale is simple, and though the action does ramp up, most of the excitement within these pages is found in the conversations between the green woman, and a demonized astronaut.

Demons in outer space. Are you not yet intrigued?

How does someone entice a perfect beauty to act against her own nature, and betray the one her heart most loves?

This is not an easy feat, but with each phrase, and each proposition, the menace leaps off the page. Suddenly, hatred of sin is being cultivated in the reader's heart.

So, this book of Lewis’ turns the reader's mind towards what God commands them to think on, and causes their spirit to fear the Lord. This will certainly bring about real, actualized wisdom in the reader. “The fear of the Lord is the beginning of wisdom.” (Prov 9:10)

What a magnificent gift is hidden in such a short book.

Read it. Go on a space adventure involving demons, mermaids, philosophy, chase scenes, hand-to-hand combat, and love. Read it and become wiser. Read it, and fall more in love with your maker.

All things are by Him and for Him. He utters Himself also for His own delight and sees that He is good. He is His own begotten and what proceeds from Him is Himself. Blessed be He! 4