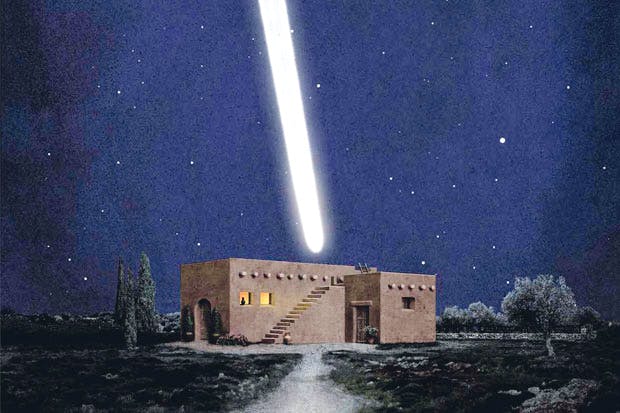 Shakespeare: “All the world’s a stage”.

True, and we can go even further: The heavens are a stage, ripe for story-telling. If you believe in God, do you suppose that He threw out the stars as a child throws pebbles? Is it beyond Him to convey meaning with His lights?

“And God said, ‘Let there be lights in the expanse of the heavens to separate the day from the night. And let them be for signs and for seasons…'” (Genesis 1:14)1

Ever wondered how a single star managed to get the Magi’s attention, convince them of the birth of the Jewish Messiah, lead them on a long journey to Jerusalem, change direction and point toward Bethlehem, and then rest over the place where Jesus was born and lead the Magi straight to it?

It’s quite the mystery. For many of us, it’s understandable only as a miracle. It’s a bush burning without being consumed, or a fisherman walking on water, or a staff turning into a snake. The Bible presents us with that sort of mystery on a regular basis: there are no natural explanations for such things (that we’re aware of), so we take it by faith that God, the creator with the keys to the cosmos, simply made it so.

There are also mysteries that are…sleuthable. According to Colin Nicholl, the Star of Bethlehem falls into that category. With careful reading of the biblical text and the help of top-notch astronomers, he developed a compelling answer to the question: What exactly was the Star of Bethlehem?

Only one solution passes every biblical, historical and scientific test. Nicholl suggests that long before Jesus was born, perhaps even as Abraham gazed at the night sky and pondered the Lord’s promised blessing, a comet was already blazing through the solar system, bearing in itself the announcement of the substance of things hoped for.

This is truly an astounding book. Usually, this sort of thing turns out to be a waste of time — something that can’t stand up to scrutiny — but Nicholl’s makes an extremely persuasive case and backs it up with careful scholarship. The science is vetted by top-shelf astronomers, and Gary Kronk, a noted cometographer, wrote the Forward and gave the book his blessing. This deserves to be taken seriously.

Out With the Old Views

Part of what drew Nicholl to the question of the Star of Bethlehem was the failure of the extant explanations to harmonize with the biblical story. As he delved into astronomy, he learned that each of the popular solutions had scientific problems as well.

A triple conjunction of Jupiter and Saturn in Pisces in 7 BC? The planets never came close enough to appear as a single star, and there’s nothing extraordinary enough about this to send the Magi camelling toward Jerusalem.

Nova or Supernova? No evidence of these things happening during the correct time period, and both are fixed objects in the sky.

A meteor? Can’t perform the movements ascribed to the star by Matthew.

Jupiter in 3-2 BC? Relies on an untenable redating of Herod’s death, and, like the others, can’t account for the movements of the biblical star.

Was the star simply a supernatural phenomenon like an angel, as has been suggested on our own site? This is not ruled out completely by the text (or science, obviously) but in Nicholl’s view it falls short for several reasons:

There are even more theories, and Nicholl politely crushes each of them with science, logic, and biblical scholarship. In fact, he lists at least four reasons why each opposing viewpoint should be set aside.

Nicholl makes his case for the Comet theory, (and not Halley’s Comet or the 5 BC Comet, by the way) with a load of evidence. The highlights:

A book review ought not to give everything away, so I won’t go into detail about the following, but perhaps the most fascinating part of Nicholl’s theory is that the celestial drama recorded in Revelation 12 may be actual astronomical history — history that featured the comet. Hint: Think of the constellations Virgo (virginity) and Hydra (dragon).

Nicholl goes to great lengths to demonstrate that a long-tailed comet would be capable of leading the Magi through every stage of their biblical story, and he does it all in a winsome, compelling manner. The book is a groundbreaking work of biblical scholarship and a model of interdisciplinary excellence, and I wholeheartedly commend it to you.

Part of the stated aim of Gospel Vision is to push against a modernistic and naturalistic tendency in current scholarship among Christian and non-Christian thinkers. This process involves embracing both natural and supernatural explanations for things as complementary to each other. The editors of Gospel Vision have some concern that the book being reviewed here fails to strike that balance. Nicholl appears to pit a natural reading (comet) against a supernatural one (angel). We believe that the worldview of the biblical authors would not make such a distinction, as hinted at in the earlier post, What Keeps Turning Astronauts Into Mystics? If the Biblical authors believe there is overlap between stars and angelic beings, the four stated objections to the angelic view lose persuasiveness. The naturalistic presupposition is perhaps most clearly on display in the final, ultimate reason for dismissing the angelic view. In essence the idea is: why look for a supernatural explanation when we have a satisfactory natural one? We believe this unhelpfully pits things against one another that belong together in the biblical mindset, and is an example of the pervasive influence of naturalism in biblical scholarship.

Cole grew up in the good part of Kansas. Treehouse construction and basketball bouncing took most of his energy, but eventually he learned to read. He even wrote children's stories (saved on floppy-disks) and set a world record for the earliest rejection by a publishing company. Life went on. He earned a B.A. in Theology, moved to Fort Collins, CO, and married a beautiful girl. These days, he and his wife spend their evenings smiling at their firstborn daughter. And changing diapers. Lots of diapers.