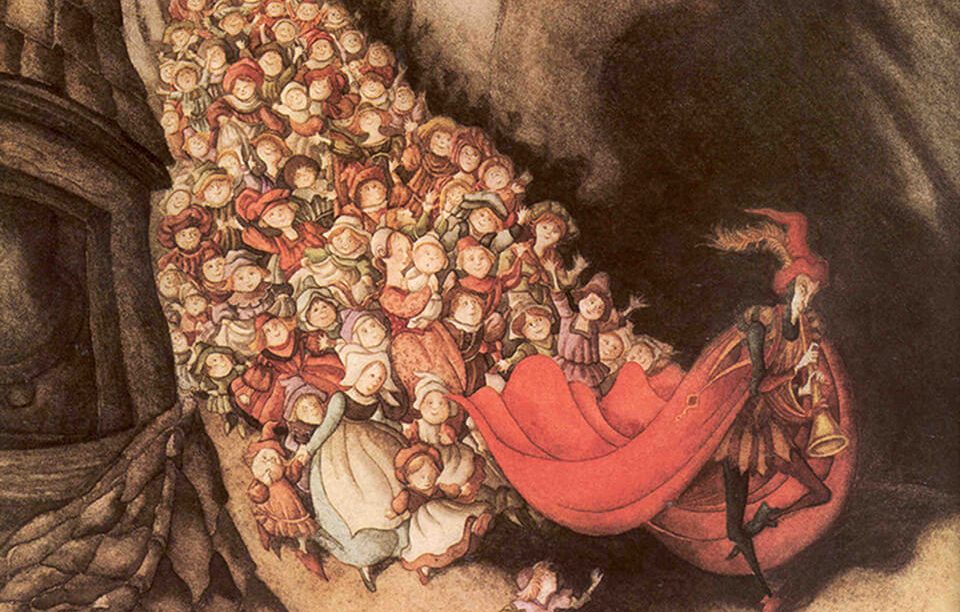 A Series Examining the Legend of the Pied Piper of Hamelin, Part 1

On June 26th, in the year of our Lord 1284, a man dressed in a coat of many colors led a musical procession of 130 youths out of the village of Hamelin to a nearby hill, and there disappeared with them.

This is the story we have come to know as The Pied Piper of Hamelin. Modern tellings invariably follow the pattern laid out by Jacob and Wilhelm Grimm in their Deutsche Sagen (“German Legends”), published in 1812, and the following summary will be most familiar to modern audiences:

The town of Hamelin, utterly infested with rats, agrees to pay an itinerant rat catcher a hefty fee if he can help them be rid of the pestilent horde. He does so by playing a tune on his flute, which incites the rodents to follow him, and he leads them into the river Weser, there to drown them. However, the townspeople refuse to pay him what is owed. In bitter retaliation, he once again plays a tune on his flute, but this time all the town’s children begin to follow him. He leads them away into a nearby mountain and disappears with them.

There have been many treatments of this story both predating and following the Grimm’s publication. Various iterations have differences with dates, locales, and other details. The basic elements remain the same: 130 youths were led away by a piper wearing a coat of many colors, and were never seen again.

The Pied Piper of Hamelin isn’t a fairy tale intended to scare greedy burghers into paying their sworn debts. Scholars have long agreed that there is a historical basis for this saga. We should prefer evidence that is contemporaneous with the events described, or as close to it as we can get. Luckily, there are two sources that existed in the late 13th and early 14th centuries, when witnesses were still alive and able to render their first-hand accounts. These are the foundation of what is, for Hamelers today, a haunting cultural memory.

The Inscription in the Rattenfängerhaus

In Hamelin, at the intersection of Osterstraße and Bungelosenstraße, stands the Rattenfängerhaus—the rat catchers house. It is a five story, heavy-timber framed house with a stone masonry exterior. Facing Osterstraße is a carved facade added in 1602, in the Renaissance style, with an ornate stepped gable, though the wooden frame and original structure are much older (Macquoid, 224).1 The house is next to the location of Hamelin’s old medieval east gate, through which the piper led his procession. There is a beam in the house that bears the following inscription, which is most likely the first written account of this incident, believed to have been carved near the end of the 13th century (Scutts, 3)2.

(In the year 1284 on the day of John and Paul, the 26th of June, 130 children born in Hamelin were led away by a piper dressed in many coloured clothes to Calvary close to the Koppen and were there lost) (Scutts, 3)2

The Bungelosenstraße translates to the “street without drums.” Local tradition holds that no music is allowed on the street in memory of the 130 youths that passed out of Hamelin on this street, never to return.3

The Earliest Picture of the Pied Piper

Originally installed in Hamelin’s St. Nicolai Market Church, this leaded glass pane no longer survives in its original form, but in a watercolor produced by Baron Augustin von Mörsperg, a traveling historian, in 1592:

The original stained glass was destroyed during renovation of the church in 1633, but it was originally commissioned and placed in the church between 1300 and 1314, just a handful of years after the Piper led his fateful procession from Hamelin. While the watercolor can’t be considered a primary source per se, like the Rattenfängerhaus inscription, there is little reason to doubt the veracity of the baron’s work, which is still preserved in the collections of the Schloß museum in Sondershausen, Germany.

Gernot Hüsam, formerly the custodian of the Coppenbrügge Museum near Hamelin, argues convincingly that the painting should be interpreted “in accordance with the way medieval symbolic pictures were to be read” (Scutts, 13)2:

The left side of a picture accordingly portrays something “sinister” (viz. Original Latin meaning for “left”). This side is dominated by the figure of the Pied Piper.

The right side indicates all that belongs to ‘the right’ in the widest sense, the divinely appointed, the righteous. Here we see a typical “Petri-Fischer” representing Saint Peter, the fisher of souls.

In the middle, the focus of the picture, we see three stags, and as such, the visual representations of the three stags composing the coat of arms of the hereditary counts von Spiegelberg in Coppenbrügge. The three brothers, Nikolaus von Spiegelberg, Moritz and Herman (the young stag without fullgrown [sic] antlers), are traditionally identified as those who rid Hamelin of the young devotees of heathen midsummer rites practised on the “Coppanberg,” which, as Gernot Hüsam has certified by reference to a document in the Museum archive dating from 1013, was the ‘Koppen’ to which the earliest reports concerning the Pied Piper referred (Scutts, 13)2.

Hüsam believes that the stained glass commissioned in the early years of the 14th century explains it all. Witnesses, grieving parents, whomever, wanted to make sure the culprit(s) and their crime would never be forgotten.

And the von Spiegelberg brothers are at the center of it all.

What it Looks Like when the Devil Walks Among us

Now there was a day when the sons of God came to present themselves before the Lord, and Satan also came among them. And the Lord said to Satan, “From where do you come?”

So Satan answered the Lord and said, “From going to and fro on the earth, and from walking back and forth on it.”

Readers will remember that, in the following verses of Job, he loses his children, and all his servants and livestock, in a series of savage and powerful displays; not only of man's cruelty, but infernal wrath as well. The fire from heaven and hurricane force winds are perhaps an unnecessary gesture, unless the Devil wanted to make absolutely certain Job understood that the hedge of divine protection he and his family had been enjoying is definitely gone.

Seductive notes on a pipe, to lure unsuspecting youths out of town, is far less spectacular. But like Job, the Hameler parents likely rent their clothes, and tore out their hair in anguish, realizing only too late that the Devil, or his servants, had lured away their precious children.

Writing in 1556, Jobus Fincelius created the first written account of the Pied Piper in his Wunderzeichen. He considered the story of the Pied Piper to be true historical evidence of "the Devils power and malice," which "afforded a terrible example of God's wrath against sin" (Scutts, 7)2. He is the first to explicitly state the infernal nature of the piper.

As an aside, we should acknowledge that stealing children away, dispossessing them of life and their parents of their company, and scarring a community so deeply that we reference the event more than 700 years after the fact, are entirely within the realm of the Devil's established character.

Modern historians don't take Fincelius' interpretation seriously, but rather chalk it up to "the climate of hysteria" in the 16th century that saw a tumult of religious strife and literal witch-hunting (Scutts, 8)2. How could he not see the hand of the Devil? There were devils everywhere, right?

Maybe not. Maybe the Devil was in one specific place on the afternoon of June 26th, 1284.

In the second part of this series, we will examine competing theories as to the fate of the 130 youths and the role played by Count Nikolaus von Spiegelberg. Were they taken away to settle newly conquered lands, or killed in some misguided attempt by the ruling count to stamp out pre-Christian religious practices?

Damon is a former Marine and currently works in a major metropolitan fire department. He and his wife and their three children reside in California.