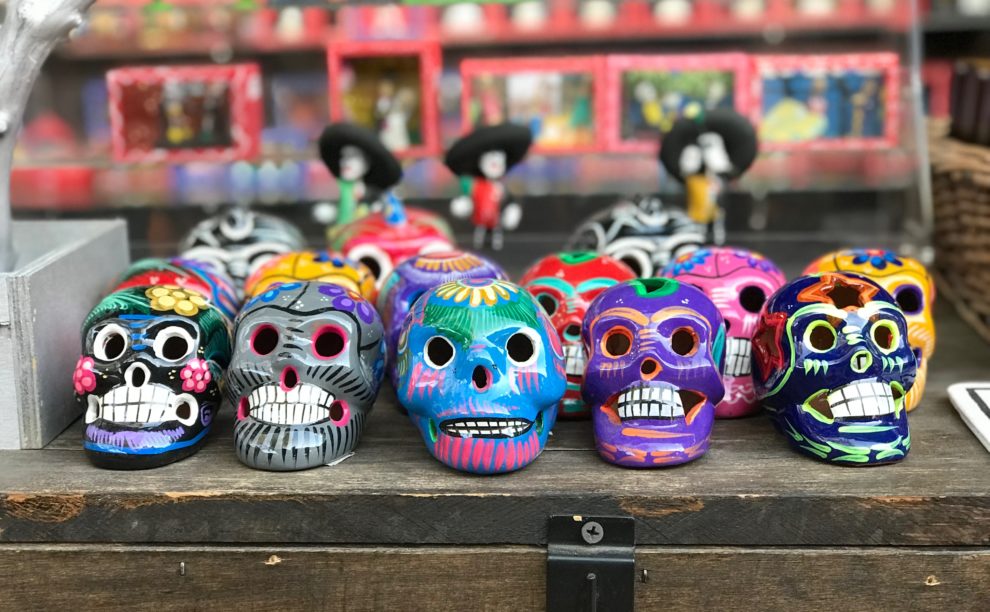 The iconic, colorful aesthetic of Dia De Los Muertos is intriguing and fun. With flowers drawn around the eyes of skulls, rich-red roses, and a striking variety of bright colors, the overall effect is delightful. The juxtaposition of death in the skulls and life in the bright flowers painted on them offers to transform a gruesome symbol into something vibrant and alive. And this is part of the point of this ancient Day of the Dead: to put death in its place, to remember our ancestors and preserve their memory, to turn our greatest fear into a more happy occasion. No wonder this Mexican holiday is pressing its way into the cultural imagination of many beyond Central America. Living in the American Southwest I may be more exposed to these traditions than people living in different parts of the country, but its broader cultural appeal can be seen in things like the recent hit movie Coco.

Last year I noticed a popular band in the Southwest hosting a concert for Dia De Los Muertos. They boasted a colorful costume contest, fun music, lively dancing, and the conjuring up of the spirits of our ancestors to give strength to the revelers. Did you catch that last part?

We may be tempted to shrug the statement off as metaphorical, thinking it’s really just about bringing up powerful memories of the dead to give us warm sentiments. But that is to ignore the history of indigenous belief and worship. At the heart of indigenous religions is Animism, the idea that the world is populated with spirits which we can interact with to appease them for our benefit. Often times those spirits are considered to be the spirits of ancestors. We can’t simply westernize these indigenous beliefs and swallow them up in our own psychologized categories. Shamans and medicine men would enter into trance states, often with the help of hallucinogenic drugs, and interact with the spirits. These spirits would guide and direct them, offering them help with things like health, crops, and fertility.

That concert was not an isolated event. In August, I spotted a local alternative newspaper cover story which read, “Shaping The Spirit: Local practitioners on alternative ways to connect to yourself and the spirit world.” The article begins with some generic advice like “mindful self-compassion,” moves from there to “sound healing,” where sound vibrations can effect people’s moods and bodies, and then seamlessly transitions to channeling spirits for healing. This section profiles a local “psychic medium and angel channeler” who channels beings from different dimensional realities. She says she interacts personally with them and points out that they are bright and funny. Other similar examples could be multiplied, and likely many will take place this month as fascination with the occult and magic increases dramatically with Halloween and Dia De Los Muertos.

How should we think about all of this? Should we dismiss it as the playful imaginings of harmless fun? Should we scoff at it as unscientific superstition? While some may want to react in one of these ways, neither of them are a reasonable response for a Christian. They both likely come from a Naturalistic worldview which assumes that everything in experience has a purely natural explanation, and that spirits and demons are therefore not real. This kind of worldview is idolatrous because it centers all truth on the (natural) creation rather than on the (supernatural) Creator. The Bible clearly speaks of the reality of conjuring the spirits of dead people (1 Samuel 28). More on that here.  It also clearly speaks of spirit beings that we call angels and demons, and which the Hebrew scriptures call gods or elohim. To deny these realities altogether, or to treat them as silly shows that your view of them is shaped more by our naturalistic culture than by the Bible.

But maybe you react to all of this in another way. Maybe you are fascinated, intrigued, and want to dabble. Maybe you have grown tired of a world stripped of wonder and transcendence and your spine tingles when you consider that you might actually encounter something otherworldly, something that transcends your daily experience. But while the Bible affirms the reality of necromancy and demonic interactions, it clearly forbids channeling spirits and related practices as abominable. Revelation 22:15 clearly states that sorcerers will find themselves outside the gates of the city of Zion and cut off from the tree of life that is inside. God went into more detail with Moses,

When you come into the land that the Lord your God is giving you, you shall not learn to follow the abominable practices of those nations. There shall not be found among you anyone who burns his son or his daughter as an offering, anyone who practices divination or tells fortunes or interprets omens, or a sorcerer or a charmer or a medium or a necromancer or one who inquires of the dead, for whoever does these things is an abomination to the Lord. And because of these abominations the Lord your God is driving them out before you. You shall be blameless before the Lord your God, for these nations, which you are about to dispossess, listen to fortune-tellers and to diviners. But as for you, the Lord your God has not allowed you to do this. The Lord your God will raise up for you a prophet like me from among you, from your brothers—it is to him you shall listen. (Dt 18:9–15)

Why Is Conjuring Spirits Bad?

The words from Moses are really thorough and clear. But does it make a difference that the modern day situations referenced earlier claim to be calling upon familiar or nice spirits? Calling the spirits angels or casting them as spirits of light does not make this better, as even the darkest spirit of all, Satan, disguises himself as a spirit of light (2 Corinthians 11:13-15). We should not ignore or deny the reality of the spirit world, but we should test every spirit to see whether it is from God (1 John 4:1-3). If you were approaching a powerful stranger or a new kind of wild animal, you would want to know if it was dangerous or not. You would want to know if the person had good intentions for you or not. We need to treat spirits the same way. If a spirit confesses Jesus as having come in the flesh, it is from God, if it does not, then it is a deceitful spirit aiming to destroy you. You should not ever conjure up spirits, but if one comes to you, you know what to ask it. But be careful, they are tricky. You shouldn’t try to face them without the wisdom and protection of the church.

I want to return to the words of Moses above for a minute. God’s people were not supposed to consult spirits, but it was not that they had no spiritual direction. They were to listen to Moses (a man God talked to face-to-face like a man speaks to another man) and God promised that he would send a prophet even greater than Moses. It’s not that God wants to hide transcendent spiritual truth from his people; nor that he wants to prevent us from encountering heavenly beings. Rather he wants us to listen to and interact with the highest and the best heavenly Being. God doesn’t want you to be deceived and destroyed by highly intelligent deceitful spirits, he wants you to be shown spiritual truth and healed from the inside out by the one who designed, created, and rules these other spirits.

Long ago, at many times and in many ways, God spoke to our fathers by the prophets, but in these last days he has spoken to us by his Son, whom he appointed the heir of all things, through whom also he created the world. He is the radiance of the glory of God and the exact imprint of his nature, and he upholds the universe by the word of his power. After making purification for sins, he sat down at the right hand of the Majesty on high, having become as much superior to angels as the name he has inherited is more excellent than theirs. For to which of the angels did God ever say,

“You are my Son, today I have begotten you”?

And again, when he brings the firstborn into the world, he says,

The desire to see flowers adorning dead skulls with life is a good one. The instinct to be reunited with lost loved ones is good and right. The longing to see death defeated by life is healthy, and the thirst to commune with powerful beings that transcend our world is not misguided. But our ancestors were not able to overcome death, that is why they are dead. The gods or angels did not rule the earth well, and have been removed from their thrones (Psalm 82:1-8, Ephesians 1:20-23). But a prophet like Moses has arisen, and he is as much greater than Moses as the builder of a house is greater than the house itself. Jesus, the eternal God, through whom all things were made, has entered our world and has revealed the truth to us by revealing himself to us. We can encounter him today in his living Spirit because he has defeated death by defeating sin at the place of the skull, and then raising like a flower from his earthy grave. It is to him you shall listen.

Painting flowers on a skull doesn’t bring it back to life or cancel death. Unless it points beyond itself to true power over death, it is merely painting over the problem. But in Christ, life really is blooming in the place of death and will ultimately overcome it forever. Look to him in faith and trade your death for life. Then go paint a colorful flower on a skull and laugh that death has been defeated. This is the Kingdom of Christ, and his festival is the Dia De Los Vivos.