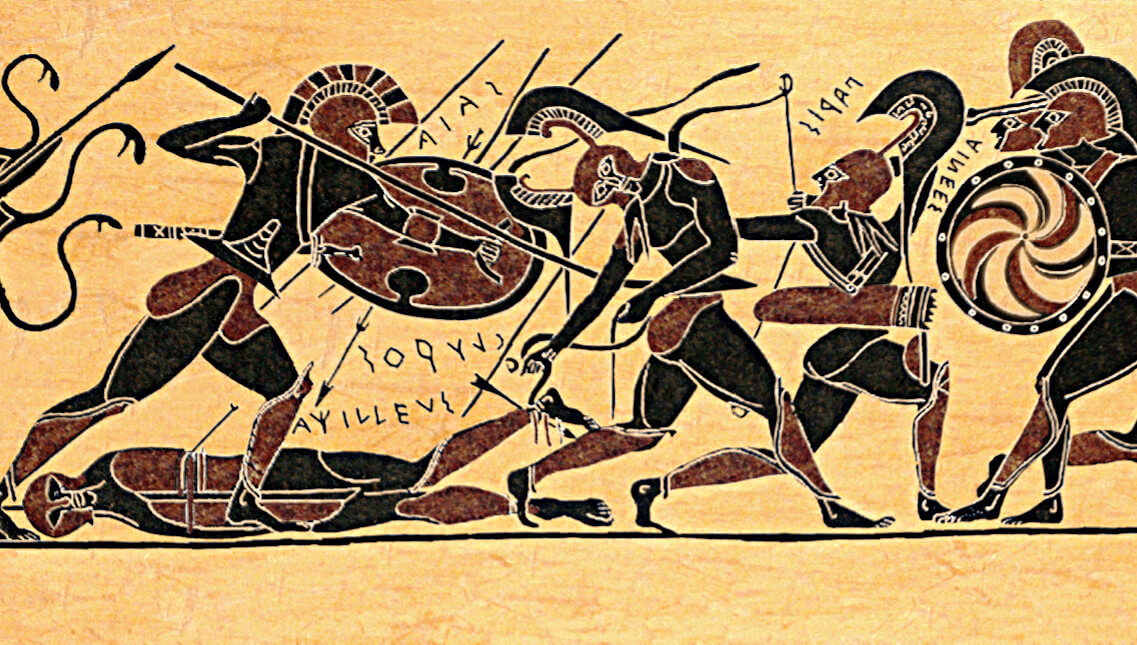 This Pile of Bullets, Right Here

From here on in, lose your purse-bound comfort animals and waifu pillows. We’re dealing now specifically with the spiritual / moral injuries that arise from combat operations and how successful societies have dealt with returning veterans. So buckle in – Safety FirstTM, there’s no acceptable casualties in training – and hold to the Oh-Shoot GripTM and try not to get dirt in your eyes. The ancient Athenians have something to add to this conversation.

The Clown Gets His Comeuppance

In cage fighting it’s called it clowning. In writing or speech it’s called a rhetorical flourish, the nod to fencing no doubt inspired by Cardinal Richelieu’s adage the pen is mightier than the sword.1 Clowning and rhetorical flourishes have at least one thing in common: on a long enough timeline – usually sooner than later, when you realize you were just lucky and not actually good – your opponent is going to throw a lunch-box sized fist and catch you in the jaw.

Derek Summerfield is clowning us when he invokes Neolithic people as a rhetorical flourish to imply that that PTSD is certainly a new thing:

A central assumption behind psychiatric diagnoses is that a disease has an objective existence in the world, whether discovered or not, and exists independently of the gaze of psychiatrists or anyone else. In other words, neolithic people had post-traumatic stress disorder as have people in all epochs since (Summerfield).2

The reference to Neolithic people is a throw-away comment intended to discourage further serious historical inquiry. It misleads the reader by referencing a vast stretch of history where there isn’t any – no written records means there’s no way to tell, one way or the other, what effect combat related stress had on warriors and the societies they returned to.

Perhaps we’re intended to walk away with is a vague sense that the people who built Göbekli Tepe or Stonehenge certainly had their stuff together more than we do.  It is hard to imagine purse dogs and waifu pillows being part of those societies. More apropos, warriors returning from crushing their enemies and glorying in the lamentations of their newly-seized battle-brides presumably weren’t racing each other to the bar to cry over flagons of this newly invented frothy beverage people had taken to calling beer.3

I’d wager the clowning is intended to distract us from a damning counter-punch to Summerfield’s thesis – if roughly 2,500 years ago isn’t too recent as to be inadmissible to the conversation. I submit the Golden Age of Athens – of the 5th century BC – as the left straight Summerfield somehow won’t see until he watches himself rag-doll to the mat in the replays.

5th century BC Athens was a fully-militarized society requiring compulsory service from every one of its male citizens (Doerries, 77).4 For Athenian males this century would require nearly 80 total years of warfare (Doerries, 4). It is remarkable, and nearly unbelievable, that when Athenians weren’t Exporting FreedomTM they were racking up some of the “greatest humanistic achievements” in all of history. Sculpture, poetry, philosophy, politics – all of it – were “forged in the crucible of constant military conflict” (Doerries, 76).

Perhaps one of the most  overlooked yet crowning achievements of this ancient democracy, from which we have borrowed so much, was the wholesale use of the arts to communalize the experience of war (Doerries, 76).

The Athenian General Sophocles (497-406 BC) is famous as one of three playwrights from this time period whose works have survived in modernity. He and his contemporaries – including the greats Aeschylus and Euripides – understood that if Athens were to survive as a society they had to help “those who’d been to war make meaning out of their fragmented memories and to evenly distribute the burden of what they brought back from battle upon the shoulders of all Athenians” (Doerries, 76).

In a population of men who were entirely veterans, or soon destined to be, there was no such thing as suffering silently. Psychological wounds are invisible only so long as a minority of your population is suffering from them. Athens, the proverbial city shining on a hill, would implode overnight and be forgotten by history if its leaders couldn’t find a way to make sense of their citizens’ wartime experiences.

“Look around you. No one in this room knows there’s a war going on.”

In 2013 my friend had returned from his second year-long deployment in the ongoing, seemingly never-ending, Global War on Terror. We sat in a local watering hole in Petaluma when he made this observation; the people around him seemed unaware because the war costs them nothing personally, socially, or politically, to participate.

In America, less than one half of one percent of the population has seen service in the longest wars in our nation’s history (Doerries, 77). In light of this disparity it’s no wonder we struggle to understand the psychological cost of learning to kill on warriors and their societies.

In the 5th century BC Sophocles and his coevals were still writing plays referencing that ultimate touchstone of Greek culture, the Trojan War (1260-1180 BC).5 Yet they weren’t writing propagandized odes to impossibly-stout demi-gods in order to inspire young men to outrageous acts of bravery or to trick them into thinking they’re invincible. There was no sugary coating to stories like Ajax or The Madness of Hēraklēs.

[It] includes a horrifying scene in which the Greek hero and combat veteran Heracles goes on a killing spree in his own home, executing his wife and children – at least one point-blank with his weapon – mistaking them for his enemies (Doerries, 94).

Ajax takes place after the conclusion of the 9 year, must-have-seemed-never-ending Trojan war.

…[it] tells the story of a formidable Greek warrior who loses his friend Achilles in … the Trojan War, falls into a depression, is passed over for the honor of inheriting Achilles’ armor, and attempts to kill his commanding officers. Feeling betrayed and overcome with blind rage, Ajax slaughters a herd of cattle, mistaking them for his so-called enemies. When he finally realizes what he has done – covered in blood and consumed with shame – he takes his own life by hurling his body on a sword (Doerries, 3).

These plays were performed in a theater that could house most of the adult male population of Athens. Sophocles and other generals like him would have had seats in the front row – would have heard Philoctetes scream the line the generals have killed me! and felt the actor’s flying spittle. The only women in attendance were the high-priestesses. Seated according to rank and military unit, the further you got toward the nose-bleeds, the younger you were because you had less skin in the game – and maybe less need of the lessons – than the older dogs up front.

At first blush this isn’t the sort of situation or material you’d choose to pump up the patriotic element in the crowd and get young folk excited to take their share of  the burden in this nigh-on century of war. So what gives?

In the industry we call a summary of the commander’s main objectives to be his statement of intent. Sophocles might be saying young men, know well the prizes and perils that accompany citizenship in Athens in their full and horrible details. Brian Doerries, author of The Theater of War, adds the following observation:

…some scholars now suggest that attending the dramatic festivals in ancient Greece and watching plays by the great tragic poets served as an important right of passage for late-adolescent males… so many of the tragedies feature teenage characters… thrust into ethically fraught situations with no easy answers and in which someone is likely to die… this [prepared] late adolescents for [the] ethical and emotional challenges of adult life, including military service and civic participation (Doerries, 11).

No One is Left to Drink Their Cup Alone

In a city of veterans, each affected to varying degree by his trials of service, no one has to suffer alone. Your neighbors – the guys who your wife and children will run to if you’re in a fury and trashing your own home, or beating your dog senseless in an wine-fueled rampage – are the same guys who either stood beside you in the massed ranks of infantry or have gone in those steps before you. They are ideal intercessors because they can almost say Brother, I know exactly what it’s like. If they’re younger than you – we are insufferable in the industry for calling grown men kids because they are junior grade in the service – they know well enough to go get one of the men who did walk alongside you. That one is a salty dog who knows better than to put up with your arrogant refusal of counsel.

What few of your neighbors hadn’t seen military service have at least all been to the Dionysian theater festivals – including your children and your wife – and at least have a context for your anguish and wrath. None of your behavior is excused – there is always a way forward that doesn’t involve wrath, violence in word and deed, and unrelenting substance abuse. But – and this is huge – your family and neighbors understand your suffering, even if impersonally, and can appropriately contextualize it.

In Summerfield’s case we’re left to assume there isn’t a lot of cross-talk among the PhDs, up to and perhaps including the threshold of he never once cracked a history book, not ever. This whole debate over the recent historicity of PTSD strains credulity because it seems so open and shut from the onset, but incredulity is not an argument.6 Ancient Athens at her zenith stands in as a rebuke, however. Athenian society was structured to deal with the reality of combat related stressors that affected the entire adult male population. If the Greeks ever questioned the existence of combat related stress, that debate is lost in pre-history, perhaps much further back than the Trojan War.

In the next installment we will explore how the ancient Israelites communalized the experience of combat and killing by taking a look at the book of Numbers, chapter 31.  We will relate the contemporary concept of a spiritual / moral injury, brought to us by Dr. Jonathan Shay, with the cleansing rituals required of Israelite warriors.

Damon is a former Marine and currently works in a major metropolitan fire department. He and his wife and their three children reside in California.