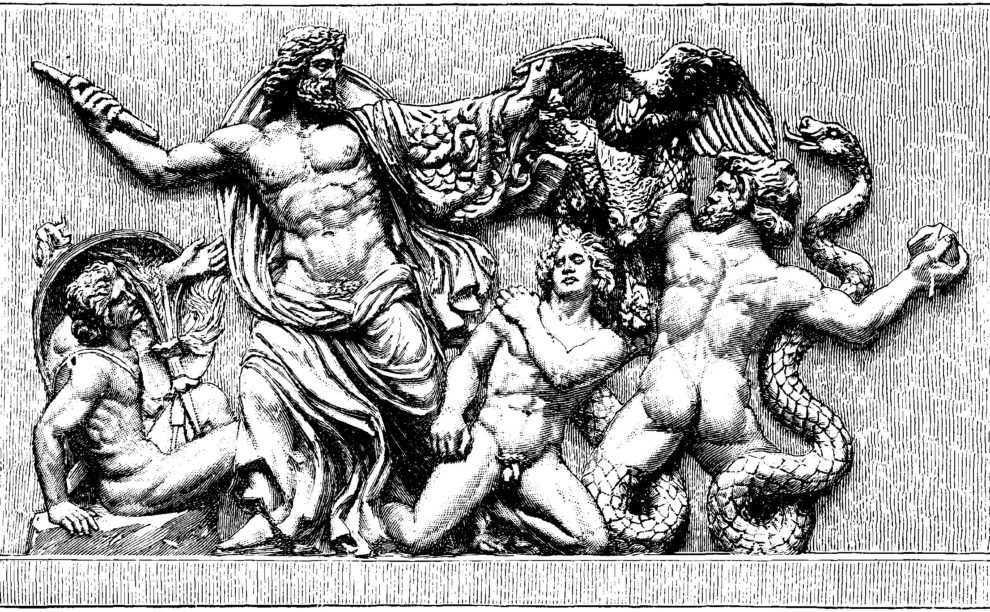 As a boy I was taught to read the ancient Greek stories as myths, tales about made-up gods used by primitive peoples to explain powers they could not understand. You see, back in the ancient days parents and teachers didn’t know what to say when their kids asked them where the lightning came from, so they invented Zeus, who sits above the clouds and throws lightning bolts. If only they had known about water droplets and ice crystals bouncing off each other, creating a charge. Why does the release of electrical energy zig and zag? We actually don’t know.

But what if Zeus and his pantheon are not made up? What if the Iliad is not myth but a kind of history? What if Pan was real? What if there are thrones and powers and authorities in the heavens affecting the affairs of men? This is surely what many of the ancients themselves truly believed. The classical world had its skeptics, much like our own day, but the Epicureans and the Aristotelians did not dominate the ancient view of the gods. According to award winning Oxford fellow Robin Lane Fox, many of the ancients had regular experiences of the gods. Fox records Maximus of Tyre’s 2nd century personal experience of Castor, Pollux, and Heracles ‘not in a dream, but in waking reality’ (144).1 He also recounts Philostratus’ writings among the intellectuals of his day, in which he “gave space to visible proofs of the heroes, especially the giant skeletons which had recently come to light on nearby beaches and headlands…bones fit for fifteen-foot heroes…This evidence was not his invention.” It is worth noting that this 2nd century Greek sophist was not previously disposed to believe these things. In fact he came to Troy “doubting the heroes’ existence, and he leaves with a new faith…He no longer scoffs; he learns one of life’s lessons. Among his business and petty commerce, he is to trust what Homer tells him” (147).2 Fox cites several more ancient writers along similar lines, including Eunapius and the Emperor Julian who claimed that Zeus was his protector, warning him about plots against his life.

I’m not trying to make the case that everything Homer wrote was true. Nor am I making a case for the worship of these gods. That would be horrible, because these gods are counted as nothing before Yahweh who made the heavens and their whole host. We are to have no other gods in His presence. Besides, I have read the accounts of these gods, they make more trouble for their worshipers than they help.

The Bible Suggests That Zeus Is Real

So if Zeus is real, and Homer was not writing pure myth, who and where is Zeus today? I think the Bible tells us. The answer is in Jesus’ letter to the church in Pergamum:

And to the angel of the church in Pergamum write: ‘The words of him who has the sharp two-edged sword. ‘I know where you dwell, where Satan’s throne is. Yet you hold fast my name, and you did not deny my faith even in the days of Antipas my faithful witness, who was killed among you, where Satan dwells.” (Rev. 2:12-13)3

What is this about the church in Pergamum dwelling where Satan’s throne is? Does Satan live in Pergamum? A quick look at an encyclopedia entry about Pergamum reveals that this capitol of Asia was famous for being the place of the altar of Zeus. This altar was no peripheral thing in the city, but was a great sculpture 125 by 115 feet, considered by some historians to be one of the 7 wonders of the ancient world (Pfeiffer, 1309).4 What am I saying? I am saying that in Revelation 2, Jesus seems to be equating Zeus with Satan, which shouldn’t be surprising since both can be considered the prince of the power of the air. If this is the case, then it adds a bit of punch to Jesus’ statement that he saw Satan fall from heaven like lightning (Luke 10:18). That is kind of like saying you saw Thor fall to the ground like a giant hammer.

This isn’t the only Biblical reference to Greek concepts as historical rather than mythical. In 2 Peter 2:4 Peter reminds his readers of when, in the time of Noah, God cast a group of rebellious angels into chains of gloomy darkness in Tartarus.  Many translations read hell, but the standard ESV gives a footnote pointing out that the Greek word is Tartarus. What is Tartarus? It is a place in Greek history where the Titans (half-gods, half-men) were banished as punishment. This doesn’t mean everything the Greeks thought or wrote about Titans, Tartarus, Zeus, etc. is correct or helpful, but it does suggest that it is not myth. The angels that Peter says were given this punishment in Tartarus seem to have been the ones involved in the creation of the Nephilim, a strange kind of being very much like the Greek Titans.

This Is Significant For You

If this is true, then we live in a world much more strange and interesting than what many of us were taught to believe in school, and the characters in Homer may be closer at hand than we tend to think.  As a Christian I grew up being taught about angels and demons, so I knew about beings that lived in the heavens. Why then, was I so ready to dismiss all other accounts of similar beings as myths? My view of human history was very modernist, believing that the peoples who came before us were simple and superstitious, and that a natural explanation was all that was credible in any account. This is how history is taught. My view of angels and demons was peripheral, and I was mostly encouraged not to think about them too much. I can remember being taught in Sunday school that I should not attribute events on earth to angels, but to things like centrifugal force. The British philosopher Alain de Botton picks up on how anemic our reasons are for rejecting Homer when he writes,

An advantage of more prolonged encounters with Proust or Homer is that worlds that had seemed threateningly alien reveal themselves to be essentially much like our own, expanding the range of places in which we feel at home. It means we can open the zoo gates and release a set of trapped creatures from the Trojan War or the Faubourg Saint-Germain, whom we had previously considered with unwarranted provincial suspicion because they had names like Eurycleia and Telemachus or had never sent a fax. (26-27)5

The major difference between the world Homer was writing about and our world today is that Zeus has since fallen from Mount Olympus like a lightning bolt under the feet of Jesus. He and many of his followers now roam around the earth looking to inflict vengeance on humanity, particularly those in Christ. This means that if anything, they are nearer to you now than in the days of Homer. They are invisible, but their influence can be quite obvious if we stop pretending they are mere myths and open our eyes to the wonderful world in which we actually live. We should not live in fear of these deposed heavenly rulers, but their reality is worth knowing, especially for people who are engaged in a cosmic wrestling match with them (Ephesians 6:12).

While it is important to be aware of these realities, Jesus says we should be careful that this doesn’t become our boast more than our names being written in the book of life. Everyone baptized into Jesus will live forever in the paradise of the new heavens and the new earth, eating freely from the tree of life, while Satan will burn in the lake of fire, cut off from his sweet ambrosia forever because of his high rebellion against the true God of all.